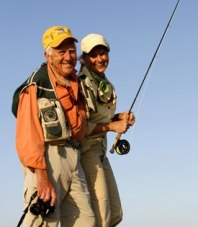 We live in the Ozark Mountains of Oklahoma where we moved in 2005, near Tahlequah.   This may come as a surprise but the topography of the north-eastern corner of Oklahoma is almost identical to that of the Arkansas Ozarks where we lived for many years near Mountain Home and the fabulous White River.  The entire area is criss-crossed with beautiful little spring creeks and cool water rivers and in fact there are three smallmouth streams within 20 minutes of our home. A large lake -Tenkiller – is nearby and the Illinois River flows from it as a cold, trout stream. Big striped bass enter the Illinois from the Arkansas River and provide another wonderful fishing opportunity. Lots of other waters and a wide variety of fish are within easy driving distance, so obviously, this isn’t the typical terrain that most folks think of as Oklahoma.

Dave is an Oklahoma native from this area and attended college in Tahlequah, so he knows and loves this countryside very well. Emily was born in northern Arkansas, and these lush, rolling hills and low mountains  feel just like home. A lovely trout stream flows through the property which we use, along with the pond, to teach fly fishing in the spring and fall. We will also continue to speak and instruct at events across the country and occasionally take groups to fly-fishing destinations around the world. Writing, photography and fly design are year-round projects as well as working with stream owners to ‘redesign’  streams to improve fish and wildlife habitat, stream stability and the natural beauty. 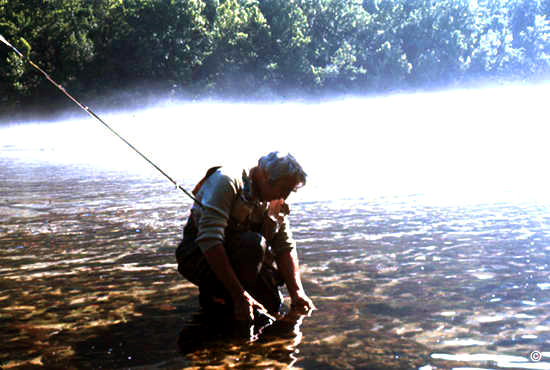 Dave is passionate about his art and uses every opportunity to create new paintings and drawings as well as commissioned originals. He and Emily design and produce new products such as note cards,

We hope that you join us on this continuing journey in this wonderful sport of fly fishing.

Dave is a native Oklahoman who resigned his position as a research chemist, more than 40 years ago, and pooled his talents in painting, illustrating, writing, photography, fly fishing, fly tying and lecturing to embark on a new career as a full-time professional in the art of fly fishing. 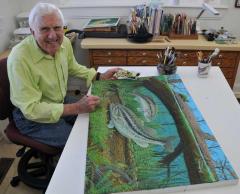 He’s also co-authored or contributed to many other books, including The Flytyer’s Almanac, Second Flytyer’s Almanac, Art Flick’s Master Fly Tying Guide, McClane’s Fishing Encyclopedia, Migel’s Stream Conservation Book and Masters on the Nymph, and many others. He’s illustrated over 20 books including Steve Raymond’s Year of the Angler and Year of the Trout plus President Carter’s Outdoor Journal. Dave demonstrates his fly-fishing and teaching skills in several videos and through guest appearances on televised fly-fishing programs.

Dave’s experience and creative outlook on the whole spectrum of fly fishing have earned him the reputation of being one of the top professional fly fishers in the sport. He has been the recipient of many awards for his fly-fishing and fly-tying contributions, including induction into the National Fresh Water Hall of Fame, the Trout Hall of Fame, Max Ander’s Wild Trout Award for his work on propagation of wild trout and the Federation of Fly Fishers’ Conservation Man of the Year Award. Other honors include the Buz Buzeck Flytyer’s Award which is the highest honor in the fly-tying world and recognized his innovativeness in new fly-tying patterns and his national fly-tying activities, and induction into the Catskill Fly Fishing Center and Museum Hall of Fame. The FFF James E. Henshall Award was given for his work in warm-water fishing and conservation, and he received FFF’s Ambassador Award for national and international promotion of fly fishing and conservation. Dave is in the Arkansas Game & Fish Hall of Fame and was given the Lifetime Contribution Award  from the National American Fly Tackle Trade Association. 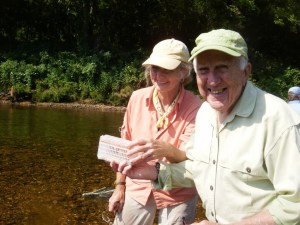 One of Dave’s most notable contributions to wild trout management and preservation is the Whitlock-Vibert Box System — a unique and efficient in-stream salmonoid egg incubator and nursery devise. He worked for seven years researching and developing this system and then wrote and illustrated an instructional text, the FFF Whitlock -Vibert Box Handbook. We are currently in the process of creating an entirely new instructional dvd. Today, under the sponsorship of the Federation of Fly Fishers, this Whitlock-Vibert Box program is used throughout the world for introduction or enhancement of wild trout, char and salmon stocks. The WV Box was used to stock what became the world record brown trout of the White River system of Arkansas.

He has always been a champion of cool and warm, as well as cold water fisheries and is known internationally for his innovative and effective fly-tying designs, including the popular Dave’s Hopper. All of Dave’s work, especially his art, reflects the realism of nature and related fly-fishing subjects through the eyes of a true sportsman. 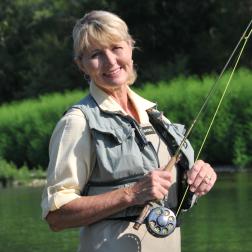 Emily has been an avid outdoors woman most of her life. Born in Arkansas and raised in Colorado until she was 12, when her family returned to the South where she had learned to fish when she was seven years old during trips to her grandparents’ Arkansas farm. Along with her two brothers she found a love for the nature and the outdoors early in her life. She has degrees in botany and biology and is a conservationist in the true sense, willing to work for preservation of the natural world and the understanding of why it’s so important.  Honored as Woman of the Year by the Federation of Fly Fishers Southern Council, she has also received conservation awards from the Sierra Club and Wildlife Federation.

Emily is an accomplished fly-fishing instructor and she and Dave, as a team, teach fly fishing at their Oklahoma setting and around the country. She’s passionate about getting more women into fly fishing because she feels it’s such a perfect sport for women and teaches women’s casting at events throughout the year. She’s an excellent lecturer whose programs include fly-fishing travels to New Zealand and other great destinations; getting started right in fly fishing; natural and imitation fish foods; and streamside wildflowers. As a photographer, her work has appeared in several national publications and Dave’s books and on the cover of Fly Fisherman Magazine. Emily edits all of Dave’s work and is truly his partner in all of his writing, art and video projects. 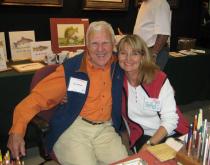 Dave and Emily combined their talents in 1991 and have lectured, instructed and fished together around the U.S. and abroad. A unique fly-fishing team, they are devoted to the world of fly fishing and conservation, both professionally and personally.

Who are Dave & Emily?

Emily and Dave combined their talents in 1991 and have lectured, instructed and fished together around the U.S. and abroad. A unique fly-fishing team, they are devoted to the world of fly fishing and conservation, both professionally and personally. They live near Tahlequah, Oklahoma, in the lovely Ozark Mountains of northeastern Oklahoma.